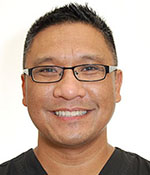 Dr. Edwin Coligado is a graduate of the University of Texas Health Science Center Dental School in San Antonio, considered the top ranked Dental School by U.S. News & World Report at the time. Dr. Coligado received his Bachelor of Science degree in Chemistry from the University of Dallas, which included a core curriculum of liberal arts studies and studies overseas in Rome, Italy. He has been in practice in the Kingwood/Humble/Atascocita area for over 29 years.

Dr. Coligado was born in Cleveland, Ohio. He grew up in the Texas Panhandle town, Borger, where his father, Eduardo, had a private medical practice specializing in gastroenterology for over 30 years. His mother, Ely, was an R.N. and the office manager for his father's practice. His parents, originally from the Phillippines, retired in Kingwood.

His siblings are Eric, David, and Emy.

His hobbies include watching football, baseball, and playing tennis. He loves the competition and camaraderie of USTA tennis.

Dr. Coligado is married to his beautiful wife, Maria. They now have 4 wonderful children, Hector, Nathalia, and twins, Joseph & Isabella.

Dr. Coligado invites you to come by and meet him and his fantastic dental team to make sure you get the quality dental services you deserve.